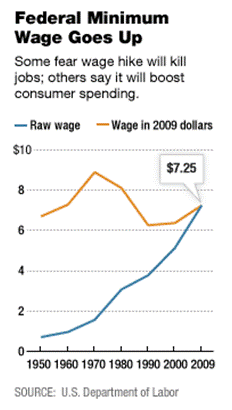 On July 24, 2009, the federal minimum wage increased from $6.55 an hour to $7.25 an hour. According to NPR’s “Your Gains, Losses in Minimum Wage Hike”, the roughly 5 million wage earners who make less than $7.25 an hour will see an immediate benefit, as likely will another approximately 10.5 million wage earners above them as employers raise their pay scales across the board.

Given the current recession/depression we are in, there is more than the usual level of controversy attending the increase. Conservative economists contend the wage increase will only deepen unemployment as employers respond by cutting jobs. Liberal economists contend the wage increase will put more money into consumers’ pockets, leading to $5.5 billion in additional consumer spending over the next 12 months.

We may never know. NPR interviewed an economist at UC Berkeley, David Card, who noted that a famous study he conducted (studying the impact of a minimum wage increase on New Jersey’s fast-food industry in the 1990s) showed that the wage increase caused no significant change in the total number of jobs. UC Irvine economist David Neumark, however, says not so for the least-skilled workers such as teenagers. He estimated that the wage increase will lead to the elimination of roughly 300,000 jobs for people in the 16-24 year age group.

Share on FacebookShare on TwitterShare on Linkedin
Posted in News and tagged economy, minimum wage
← I'm Baaaack (and with a Jury Verdict to report)An Ode to Whistleblowers and the Law: Part I (2021) →