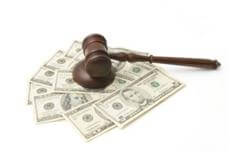 This gem of an editorial appeared in the Wall Street Journal: "Arbitration Works Better than Lawsuits" . The author is a lawyer at Hogan & Hartson, an 800+ lawyer law firm whose enviable roster of clients reads like a who’s who of Fortune 500 companies: Alcatel Space, Carnival Cruise Lines, Genetech, Exxon, General Dynamics, American Express, etc. She argues that the Arbitration Fairness Act of 2007 is a bad idea. That law is currently before Congress and aims to ban mandatory arbitration clauses from employee and consumer contracts. Her editorial is remarkable for its dishonesty. Here’s what she says and why it’s dishonest:

Congress is taking up legislation this week that will wipe out arbitration provisions in hundreds of millions of consumer contracts — for everything from credit-card agreements to cell phones to health-insurance policies, even a contract for the purchase of a kitchen sink. The bill is so sweeping that it wouldn’t apply just to contracts consumers may sign in the future. It will cancel arbitration agreements agreed to in the past.

Fact : The bill only bans mandatory arbitration clauses. If you the consumer or you the employee still think arbitration is a good idea, then the bill doesn’t stop you from doing so. It just prohibits contracts that force you to arbitrate whether you like it or not. In other words, the bill wants to give you a right to choose.

This legislation is a top priority of plaintiffs’ lawyers, since arbitration keeps big-dollar disputes out of the courtroom. But it’s a bad deal for consumers. The law will not make arbitration "fairer"; it will make it go away, because it is very difficult to get two sides of a dispute to agree to much of anything once a dispute has started. That inconvenient reality is one that some of our lawmakers are simply ignoring.

Fact : Why would making arbitration optional, not mandatory, for employees and consumers be less fair? If arbitration were as good for consumers and employees as the article makes it out to be, then why is there a need to force them to do it? All disputes boil down to one thing: money. Plaintiff’s lawyers typically charge their clients a percentage of that money. If arbitration led to "fairer" results, that can only mean one thing: larger money awards for the consumer/employee and for their lawyer. Sounds good. So then, why would plaintiff’s lawyers oppose arbitration? Because arbitration does NOT lead to a fair money award for the consumer/employee. The awards are typically 50% or less of what the consumer/employee would get from a jury in a courtroom. If you want to know why, read "Is Arbitration Good or Bad for Employees?" .

[Arbitration] can help consumers resolve disputes with companies without the high costs and legal fees of a full-blown lawsuit.

Fact : Arbitrators are like private judges, with one big difference. The judge doesn’t charge the parties for his services, he or she is paid by the taxpayers. Arbitrators, who can charge $5,000, $10,000 or even more per day, are paid by the disputants. If you lose your dispute before the arbitrator – an most likely you will – you could be on the hook for his fees. If that happens, get ready for a whopper of a bill.

Without arbitration, he wrote in the 1995 decision, Allied-Bruce Terminix Cos. v. Dobson , "the typical consumer who has only a small damages claim (who seeks, say, the value of only a defective refrigerator or television set)" would be left "without any remedy but a court remedy, the costs and delays of which could eat up the value of an eventual small recovery."

Fact : With all due respect to Justice Stephen Breyer, consumers/employees who have dispute over small damages can take their case to small claims court where they can have their case heard by a judge who won’t charge them by the hour like an arbitrator might. If they feel like it, they can even have their case decided by Judge Judy or the People’s Court. Small disputes got resolved before arbitration ever appeared on the scene, and they will continue to get resolved even if arbitration is no longer an option.

The average consumer with a small claim is unlikely to sue at all. Studies confirm what common sense suggests: Few, if any, lawyers will even take cases involving small potential recoveries. And without a lawyer, navigating the court system is nearly impossible.

By contrast, arbitration is much less expensive for consumers than courts; many businesses have agreed to pay virtually all of the costs of arbitration.

Fact : Unless you lose. Then you might be on the hook for the arbitrator’s fees and costs. I have heard of cases where employees lost at arbitration and got stuck with an arbitrator bill as high as $60,000. The arbitrator’s bill was larger than the amount in dispute.

Decisions can be rendered after hearings by telephone or on documents alone, rather than requiring a consumer to spend time on an in-person hearing. And arbitration is far quicker. Claims are frequently resolved in a matter of months, compared with an average two-year wait in, say, federal court. Our courts are not designed to afford individual consumers realistic access to redress for commercial disputes with large companies.

Fact : Many arbitrations severely limit the consumer/employee’s right to call witnesses or obtain evidence. That is a big part of the reason why arbitrations might in some cases be quicker than a full-blown lawsuit (just as often, they take the same amount of time or longer). But without witnesses and evidence, you lose. A lot of the time in litigation is spent forcing the employer or big company to cough up important witnesses and evidence which they, understandably, don’t want to surrender to the consumer/employee.

Opponents of arbitration also assert that it stacks the deck against consumers. Research shows otherwise. Generally, consumers do at least as well in arbitration as they would in court. One recent study by the American Arbitration Association showed that consumers prevailed in about 80% of arbitrations they initiated, either through an outright win or voluntary settlement. Similarly, a 2004 report by the National Workrights Institute demonstrated that employees prevailed in 63% of cases brought in arbitration, as opposed to only 43% of cases filed in court.

Fact : Research from neutral experts overwhelmingly shows that arbitration is bad for consumers/employees. See "Is Arbitration Good or Bad for Employees?" .

And in big disputes, consumers can and do win big awards. Recently, an arbitrator ordered a health-insurance company to pay a Los Angeles woman more than $9 million for improperly cutting off her coverage. A few years ago, another arbitrator ordered an extermination company to pay a Florida homeowner more than $4 million after the man’s home was severely damaged by termites.

To be sure, arbitration is not perfect. Congress has heard anecdotes about the unfairness of a particular arbitration process, either in its design or execution. But the solution is not to eliminate all arbitration.

Fact : The Arbitration Fairness Act of 2007 does not seek to "eliminate all arbitration", only mandatory arbitrations. The choice is left to consumers/employees whether or not they wish to arbitrate.

Courts can — and do — refuse to enforce arbitration agreements if they are unfair, and they overturn arbitration awards resulting from a biased or corrupt arbitrator.

Fact : Courts are more than ever pinched between rising caseloads and tightening federal and state budgets. Too many courts are housed in decrepit buildings that barely function and are just barely getting by on small rosters of overworked judges. It should come as no surprise, then, that judges are typically very eager to shunt cases off into arbitration and clear them off their desks. Likewise, judges are typically reluctant to overturn arbitration awards unless there is an exceptional level of corruption or bias.

Congress should think long and hard before discarding it in favor of more lawsuits — which may benefit lawyers but will leave most consumers out in the cold.

Fact : Arbitration is more often than not a tool for employers and big companies to keep a lid on the costs of litigation. The Arbitration Fairness Act of 2007 bans the imposition of mandatory arbitration clauses on consumers/employees. That is far from leaving "most consumers out in the cold".

The fact is, mandatory arbitration is good for Fortune 500 companies and employers – the very clients whom the author and her firm represent. It would be interesting to know how many consumers/employees the author represents in her daily practice at Hogan & Hartson. I’m willing to bet – Zero. She sure does seem to be very concerned about their welfare though.

Share on FacebookShare on TwitterShare on Linkedin
Posted in Arbitration and tagged Arbitration, Arbitration Fairness Act of 2007
← ‘Desk Rage’ on the RiseThank You to Michael Fox of “Jottings by an Employer’s Lawyer” →