As the world grapples with recession, here’s a look at how company managers have (mis)behaved during a time of high unemployment and off-the-charts human suffering.

In an era where capitalist companies have shown breathtakingly bad judgment and had the temerity to ask for government handouts to bail themselves out, a conservative Supreme Court continues to give employers a free pass. In “The Supreme Court moves to the right, perhaps sharply to the right”, renowned constitutional scholar Erwin Chemerinsky explains the anti-employee and anti-plaintiff direction the Supremes have recently taken. Perhaps the most underreported development is the Supreme Court’s decision to make it tougher for plaintiffs, particularly those with discrimination claims, to bring a lawsuit in federal court. In Iqbal v. Ashcroft, the Supreme Court effectively overturned more than 50 years of precedent and dramatically changed the rules of the game by now requiring plaintiffs to make “plausible” fact-supported allegations in their complaints. That’s a tall order for plaintiffs considering lawsuits usually start out with the employers having all the witnesses, documents and information. Nowhere is this more true than in discrimination cases where employee suspicions of disparate treatment or impact are often based on nothing more than differences in compensation or position over time. 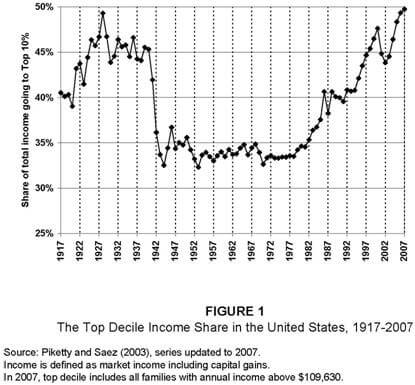 If you still have any doubt about who the big winners and losers were in this latest recession, take a look at this sobering chart from UC Berkeley economist Emmanuel Saez. It says it all. The top 10% of earners in the US went from taking 35% of all compensation in 1982 to 50% in 2007, with the last big surge starting in 2002 and continuing through the recession. It’s a safe bet that the US worker was nowhere to be seen in that cushy 10%.

Let’s hope the coming recovery brings with it a more employee-friendly environment.

Share on FacebookShare on TwitterShare on Linkedin
Posted in Editorial and tagged iqbal, recession
← Economic Recovery Around the Bend?Employers Are Now Screening Employee Facebook and MySpace Pages →