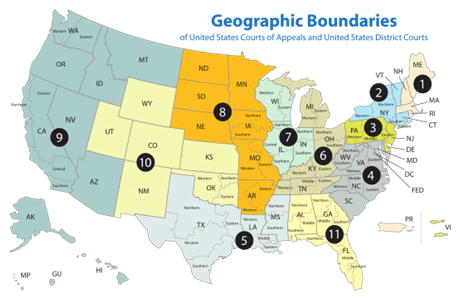 With a Democrat about to enter the White House for the first time in 8 years and with a Democratic-majority firmly in control of Congress, the conservative Federal judiciary is about to come face-to-face with the C-word – and in a big way. As the Huffington Post reports in “Obama’s Chance to Reshape Courts: Four Dozen Openings” , President Obama will have numerous opportunities over the next 4 years to appoint nearly 50 Democrats to the Federal bench.

The shift in power that will result is hard to overstate. At present, Democratic-appointed judges comprise the majority on only 1 out of 13 federal Circuit Courts of Appeal in the U.S. That court is the 9th Circuit based in San Francisco, CA. Experts estimate that within the next 4 years, that number could jump to 9 out of 13. The first test for Obama will be the 4th Circuit based in Richmond, VA. That court has 4 open seats and is currently deadlocked between 5 Republican- and 5 Democrat-appointed judges.

As the article states, judges appointed by Obama can be expected to side more often with “workers, consumers, homeowners, women and people of color who were discriminated against”. In contrast, Bush-appointed judges have generally favored business in employee and consumer disputes.

As the balance of power shifts in the Federal judiciary, it is likely that the number of employee-plaintiffs filing lawsuits in federal rather than state court will start to increase. Plaintiff lawyers typically avoid filing suit in federal court because of the anti-employee bias many federal judges have exhibited. Federal district court judges will likely also begin ruling in a more employee-friendly direction as Democrats being taking spots in the Courts of Appeal that oversee them. It should be an interesting eight, errr, four, years.