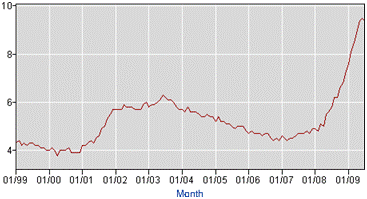 The signs of recovery (or at least a bottoming out) are there. The US economy shrank just 1% between April and July of 2009, after shrinking at a torrid 6.4% pace in the first quarter. (New York Times). The Dow Jones Industrial Average is at 9,300, up almost 3,000 from its 52-week low. And as shown in the graph above, unemployment may finally be showing signs of slowing with a loss of “only” 247,000 nonfarm jobs in July (Data from Bureau of Labor Statistics). According to the Blue Chip Economic Indicators survey of private economists released in August 2009, roughly 90% of respondents believe the recession will be declared ended in the third quarter of 2009. (Reuters: “U.S. recession seen ending in third quarter”).

California, and its sister states, Nevada and Oregon, have been especially hard hit by the recession 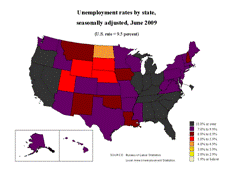 , as can be seen from the graph at right (darker is worse). California is struggling with an unemployment rate that hit 11.6% in June 2009. But California also continues to track the rest of the country toward a bottoming out. In short, we appear to have pulled back from the precipice of the “Greatest Depression”.

At times like this, BusinessWeek reminds us that it is more important than ever to be optimistic. Read “Why It’s Smart To Be Optimistic” (and watch the video) to understand why optimists, or “opportunists”, will be better positioned to seize on the opportunities that have been opened up by a restructured economy. If you’ve come this far, you’ve probably weathered the worst of it. Here’s to sunnier skies for hard-working and can-do Americans like you.

Share on FacebookShare on TwitterShare on Linkedin
Posted in News and tagged recession, unemployment
← Tip-Pooling – Can My Employer Take My Tips and How? (2023)Bad Times, Worse Managers →