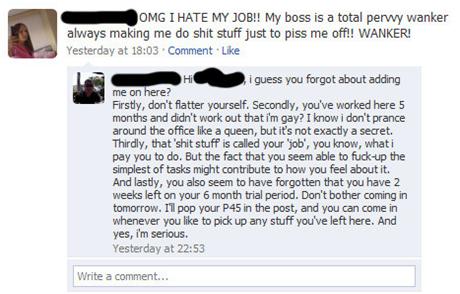 Do you have a personal account with Facebook, MySpace, Twitter or any of the other social media websites that have become so popular lately? Chances are you
do. Or you will soon. The growth of social media sites has been nothing short of breathtaking. Here are a few statistics:

Getting to know people through a social networking site can be fun and rewarding. But as with the rest of the Internet, it comes with risks for the unwary.

According to a 2009 Harris Interactive survey of 2,667 HR professionals, 45% of them said that they go to social networking sites to research job candidates. Another 11% plan to do so soon. (“45% of Employers Now Screen Social Media Profiles”). The study also found 35% of employers decided not to hire a candidate due to content found on their social networking page. Here were some of the big no-nos that HR professionals reported:

The trend isn’t limited to just employers. Some lawyers have begun researching social networking sites to gain more information about i) the lawyers on the other side, ii) the parties on the other side, iii) the jurors sitting in on their trials, and even iv) the judges overseeing their lawsuits. While there isn’t any hard data regarding this phenomenon, I have come across a large amount of anecdotal evidence. I have heard tell of other employment lawyers suddenly being confronted by their opponents with damaging, lawsuit-losing information contained in the Facebook pages of their own clients at the most inopportune times.

Some tips to keep in mind for those of you who are Facebooking or MySpacing: