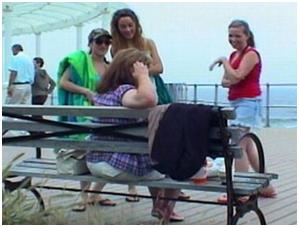 Did you know that it is NOT illegal to discriminate against someone because they are fat? There are federal and state laws against discrimination based on race, gender, national origin, sexual orientation, disability, medical condition, religion, etc. However, Michigan stands alone in having an anti-fat-ism law.

According to a new study from Yale University as reported by ABC News, weight discrimination is spiraling upward, extending into the workplace and social settings. Currently, fat-ism ranks as the third most common form of discrimination among women (after sexism and age-ism), and fourth among men (after sexism, age-ism and racism). Overweight women are twice as vulnerable as men, with fat-ism striking them much earlier in their lives. This is hardly surprising given the starved supermodel fashion culture we ironically live in.

Fat-ism promises only to worsen as waistlines in America continue their decades-long expansion. CNN Health has this interactive map showing the rise of obesity in the US between 1985 to 2006. In fact, America now ranks as the number one fattest country in the world, edging out Mexico which comes in second. Check out this global ranking of countries by obesity.

For fat plaintiffs who have suffered fat-ist discrimination, there may be one potential avenue for legal recovery. Diabetes, a disability, is often associated with obesity; and anti-diabetic discrimination is illegal under federal and state disability discrimination laws. Nevertheless, challenges remain. Juries in particular tend to be unsympathetic toward obese plaintiffs, judging and blaming them for the lifestyle choices that led to diabetes in the first place. That jury bias frequently translates into courtroom defeats or small judgments.

Of course, that is not to say that diabetic plaintiffs don’t win from time to time. The American Diabetes Association describes a few of these legal victories at their website.

As obesity spreads to more and more Americans, it is anyone’s guess whether public sympathy for the victims of fat-ism will ever build to the point that anti-fatism legislation becomes a reality. Stay tuned.