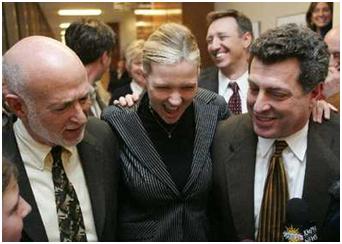 Johnson-Klein had been fired mid-season after less than three seasons as the Bulldogs’ coach. The firing sparked intense controversy.

Johnson-Klein’s lawyers, Dan Siegel and Warren Paboojian, argued that Johnson-Klein had been fired in a public, humiliating manner because she advocated for women’s rights at a university that had long viewed women as second-class citizens. They painted a complex picture in which Johnson-Klein’s players resented her tough discipline, assistant coaches resented her high expectations, and top lieutenant coveted her job, while the university grew concerned as she complained about favoritism toward the men’s basketball program.

Fresno State’s lawyer Mick Marderosian argued that Johnson-Klein was a ruthless, money- and power-hungry manipulator who mistreated her players’, flaunted university policies and had no business being anywhere near a university basketball court.

After two months of trial, the jury of 11 women and 1 man deliberated for just 4 hours before rendering a stunning verdict of 12-0 on all 13 of Johnson-Klein’s counts. The large size of the verdict was especially surprising given that Fresno jurors have tended to be conservative.

Johnson-Klein told reporters that she felt “vindicated” and remarked about the legal process: “It’s long, it’s hard, it’s not for the weak of heart. But it works, and I’m just very thankful it worked today.” Paboojian later said. “Next to (losing) one’s family, there’s nothing worse than destroying a career. I think the jury sympathized and understood that.”

In a statement, Fresno State President John Welty said, “I disagree with the decision. We will appeal. But we are determined not to be distracted by it, and will continue with the essential work of the university. I am personally committed, and this university is committed, to the well-being of all our students.”

However, it is unclear whether Mr. Welty will be leading that appeal. According to the Fresno Bee, State Senator Dean Florez on Friday called for Mr. Welty’s immediate resignation and announced that the Senate committee on gender discrimination which he chairs intends to hold a hearing in January in Sacramento to question Welty and California State University Chancellor Charles Reed. Fresno State is one of 23 campuses in the CSU system.