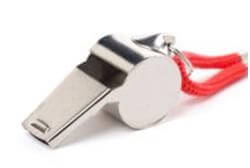 Government employees who speak out against corruption, fraud or danger to public safety, usually at great cost to their careers and personal lives, have long found the door to justice slammed shut in their faces. U.S. officials have engaged in nothing less than all-out war to silence and punish whistleblowers. The courts, instead of upholding the law, have acted as their accomplices.

In 1989, Congress had enacted the Whistleblower Protection Act (WPA), a law that was intended to protect federal government whistleblowers. After being strengthened in 1994, the WPA went on to be gutted by 13 years of hostile rulings by the highly political Federal Circuit Court of Appeals, which has exclusive appellate jurisdiction over the WPA. The Federal Circuit ruled against federal whistleblowers in a stunning 129 out of 131 decisions. The desperate plight of federal whistleblowers was covered in-depth by Salon.com in November 2007.

On December 18, 2007, the Senate unanimously passed S.274, a bill to restore and strengthen the WPA. A similar bill already passed the House on March 14, 2007. All that remains is for a composite bill to be approved and sent to President Bush for his signature.

President Bush, no friend of the whistleblower, has already vowed to veto any attempts to strengthen whistleblower rights. However, Congress is expected to comfortably override his veto by the necessary 2/3 margin.

Senators Daniel Akaka (D-HI) and Susan Collins (R-ME), along with other members of the Senate Homeland Security and Governmental Affairs Committee, had introduced the “Federal Employee Protection of Disclosures Act”, S.274 back in 2000, but the bill was mired for 8 years in a procedural labyrinth.

– Restores unqualified requirement that whistleblowers have only a “reasonable belief”.

– Bars President from imposing “intelligence employee” status in an end run to deprive whistleblowers of their merit system rights after they file suit.

– Authorizes whistleblowers to disclose classified information to Members of Congress or their staff.

It is good to see Congress step in and right the wrongs perpetrated by a judiciary that increasingly appears to be pursuing an anti-democratic agenda. Unfortunately, it took Congress 13 long years to act. That’s 13 years too late for the many thousands of federal whistleblowers who will go forgotten.

For more information, go to the Government Accountability Project.