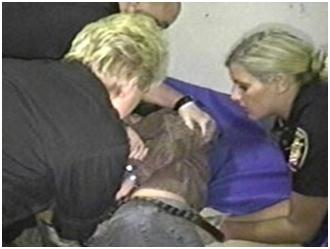 As you may know, employment law is just a subset of civil rights in general. I don’t normally cover non-workplace civil rights issues, but a news story I’ve come across seems just too egregious to let pass.

In Stark County, Ohio, 41-year old Hope Steffey was the victim of assault by a relative. Steffey’s cousin called 911 and a Stark County deputy arrived on the scene. Somehow Steffey ended up being arrested and taken to the Stark County Jail. She was then forced to lie facedown in her cell while seven male and female sheriff’s deputies stripped Steffey’s clothing from her body. A video was obtained by WKYC News which shows Steffey screaming and begging the deputies to stop as she is stripped completely naked. Warning: the video is graphic and disturbing. Steffey’s attorney alleges she was never asked to remove her clothes voluntarily and that she had to resort to wrapping herself in toilet paper in order to cover herself and stay warm overnight. When she was booked, she was allegedly given only a vest to clothe herself with.

We like to think we live in an advanced civilized society. But a single incident like this reminds us all that brutal savagery lies just beneath the surface. What makes this case worse is that the transgressors were government agents charged with protecting people. We must always be vigilant.

“Is man’s civilization only a wrappage, through which the savage nature of him can still burst, infernal as ever?”